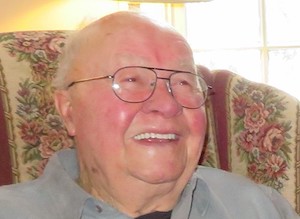 Clyde was born August 8, 1928 in Orange, NH to the late Raymond and Charlotte (Whitcher) Chapman.

Clyde grew up in Canaan NH.  He graduated from the 8th grade and only a few days later entered the workforce to help support his mother and little sister, Betty, who always held a very special place in his heart.  Clyde was predeceased by his two brothers, Clifton and Paul, and sister, Betty.  Clyde’s wife of 73 years, Marjorie, passed away on July 24th of this year.  Clyde was heartbroken and lost without the love of his life but continued to “put one foot in front of the other and keep marching on” as he would say.  The two and a half months of watching him fight with all his strength to be strong was heartbreaking for his family.  We all take comfort in knowing that he is now with “Mom” again.  The love that they shared was extraordinary and a blessing to witness for all who met them.

Clyde was an avid horseman.  He pulled his pony and draft horse teams for many decades at the local fairs.  He would volunteer his time to the local 4-H kids to shoe their  horses or share words of encouragement or advice.

Clyde and Marjorie moved to Weare, NH in 1959 where they lived full time until the winter of 1986 when they become Snowbirds and began wintering in Port Orange, FL.  They spent time at Rose Bay Travel Park and later moved to Pickwick Village, where they had a large group of friends.  Clyde loved to care for his flowers and decorate for the holidays and was often told their place was the best looking in the park.

Clyde worked for Skip Hammond Logging, with horses, while staying in a logging camp at the age of 14.  He also worked for Mascoma Lumber Company.  Clyde worked for Bithrow Construction, which brought Clyde and his family to Weare in 1959. He later worked for Brox Industries as a grader operator, where he retired at the age of 62. Story has it, he was often told he was the best fine grader operator in the northeast, in his day.  Clyde was a member of the Local 98 and The International Union of Operating Engineers.

Clyde is survived by his daughter, Carol Boyd of Daytona Beach, FL, three sons, Stephen and wife Cindie, of Antrim, NH, Merlin and wife Kim, of Bow, NH, Neil and wife Bethany, of Weare, NH, and daughter, Martha and husband Brian, of N Sutton, NH.  Clyde was a very proud Bump to 12 grandchildren and 15 great-grandchildren.  Family meant everything to Clyde!

A Graveside Service will be held Saturday, October 15th at 1:00 at Johnson Cemetery, in Weare, NH.