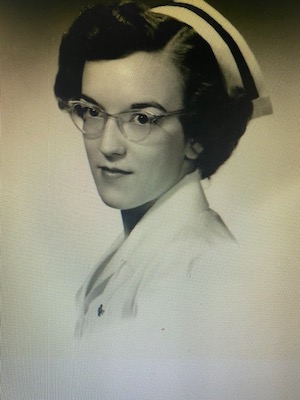 During her illness she displayed tremendous strength and humor.

Bev was born September 24, 1931 in Rutland, VT, the daughter of Clinton and Marion Lane.

After graduating from Fair Haven High School (VT) she continued her education at NH Hospital School of Nursing.  She went on to work at NH State Hospital and  Prison as a forensic nurse for 40 years until her retirement in 1994.

Bev was a member of the Weare Historical Society, Weare Garden Club, The Red Hat Society, and Bowling League.

She enjoyed traveling, gardening, knitting, crocheting, quilting, painting, reading, and crafts, Most of all spending time with grandchildren and family.

She was predeceased by her sisters Katherine Nichols, Patricia Mullen, and Francis Brown.

Those who wish to remember Bev in a special way may make a gift in her name to the Granite State VNA, 30 Pillsbury St, Concord, NH 03301.

The Hold-Woodbury Funeral Home & Cremation service is assisting the family.