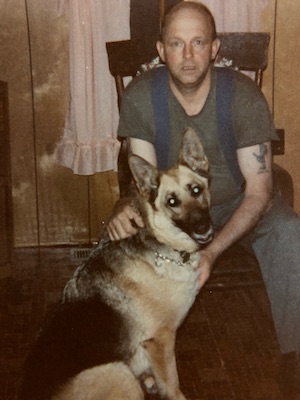 He was born on December 15, 1939 in Henniker, NH and was the foster son of Ernest and Dorothy Greenwood.

He moved to Hillsboro in 1964 and remained there for the duration of his life.  He was a retired member of the NH National Guard and Hillsboro Fire Department. While in the National Guard he belonged to the Combat Rifle Team and State Marksmanship Team competing in several tournaments throughout his career. He was also a Police Sergeant and K9 Handler for the Hillsboro Police Department and worked at various businesses in the area, including the Monadnock Paper Mills and the Town of Henniker Highway Department.

He was a lifetime member of the Fish and Game, American Legion and the Loyal Order of the Moose.  He enjoyed hunting and fishing and spending time visiting with family and friends.

He leaves behind his wife of almost 50 years, Nancy Anne (Clow) Clark of Hillsboro, her three children Katherine Marsh of Concord, NH, Earl E. Marsh of Hillsboro and Michael Clark of Jaffrey, NH, his half-brother, Lewis Clark of Stoddard, and several grandchildren and great-grandchildren.  Brad was pre-deceased by his half siblings Glendon S. Morse of Florida, John Clark of Norway, Maine, Robin Littlehall, also of Maine and Henrietta Kennedy of Islip, New York.

A burial service will be planned for a later date.  The Holt-Woodbury Funeral Home & Cremation Service is assisting the family.

In lieu of flowers, Memorial Donations can be made to the NH Fish and Game Department, 11 Hazen Drive, Concord, NH 03301.