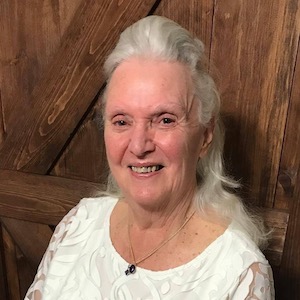 She was born on June 16, 1944 to Elphege and Irene Bourque and grew up in Manchester, NH. She later married Raymond Farrell of Deering, NH and moved there, where they started a family together. Later, Ray and Jeanne also started their own businesses (Deering Sheet Metal and Copper & Tin Works) which became a well-known fixture in Deering and the surrounding towns. Jeanne lived in Deering until Ray’s passing in 2016, when she went to live with her daughter and son-in-law in Weare, NH.

Jeanne loved to sing and dance and was an exceptional cook. She was a very loving, personable, and outgoing type person and was also very attached to her daughter and son-in-law’s two rescue kittens, as they were to her.

Jeanne is preceded in death by her husband of 50 years, Raymond Farrell. She is survived by her daughter, Deanna and husband Charles Wood of Weare, NH and her sister Pauline Davis of Manchester, NH; her three grandchildren, Sean, Christopher, and Jessica and her six great- grandchildren, whom she absolutely adored.

A Memorial Service is scheduled for March 26, 2022 from 11 to 1 pm at the Holt-Woodbury Funeral Home at 26 School Street, Hillsboro, NH.  All are welcome.

In lieu of flowers, donations can be made in Jeanne’s memory to Barking Dog Farm Rescue, 513 Cash Street, Croydon, NH 03773, or via PayPal at paypal.me/barkdogrescue Venmo: @barkdogfarm