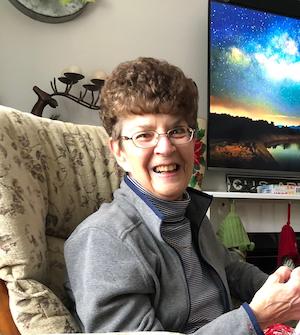 DEERING, NH:  Patricia A. Edwards, 75, a longtime resident of Deering, NH died at Concord Hospital on June 23, 2021 after a period of declining health.

She was born on March 8, 1946 in Concord, NH a daughter of the late Richard and Mildred (Gallagher) Senecal.

Patricia was raised and educated in Henniker, graduating from the then Henniker High School.  Following graduation, she moved to Deering, NH where she has resided since.  She married Allen C. Edwards and together had one son, Curtis.  Patricia worked for many years at Frameworks as an assembler.

When she wasn’t at work, she could be found at home working on Sudkos,  crossword puzzles, and spending time with her family, especially her grandchildren.  She and Allen truly enjoyed being at home spending time working on their home and enjoying the small town of Deering.

In addition to Allen, Patricia is survived by her son, Curtis and his wife Brenda, of Weare, NH, grandchildren, Grady and Emma, along with countless family and friends.

In accordance with her wishes, services will be private for her family.  Burial will be in the Butler Yard Cemetery, Deering, NH at a later date

The Holt–Woodbury Funeral Home & Cremation Service of Hillsboro, NH is assisting the family with arrangements.