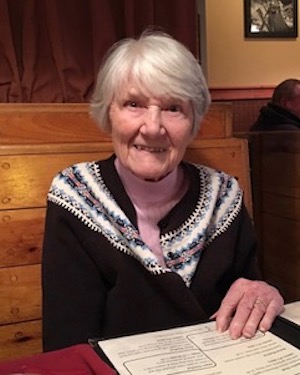 Anne was born in New Rochelle, New York to Andrew Craig Spence and Mary O’Brien Spence. She was the youngest of three children, her brothers were Charles Spence, and Thomas Spence.

Anne married George John Lischke. They enjoyed 49 years of marriage, and raised three children,  between Norwalk, CT and Hillsborough NH.  Anne, known as Mama Anne, Nanny, and Oma, was an avid gardener, nature lover, cheer leader and fierce advocate  for all of her children and grandchildren’s sports, dance and events.  She was a world traveller, incredible story teller, trivia whiz, cook of many a “light lunch” and lover of all animals great and small.  In her earlier years she worked as a book-keeper, but her passion and true love was always her family and her many pets.

She is also survived by several nieces and nephews, and friends near and far.

The family wishes to acknowledge the incredible care and concern, given to Anne at Hillsboro House Nursing home, for which they are forever grateful.

There will be no calling hours, and a Celebration of her life will be held at a later date.

In lieu of flowers, Anne would have appreciated a donation made to Sullivan County Animal shelter, as Anne loved all creatures great and small.