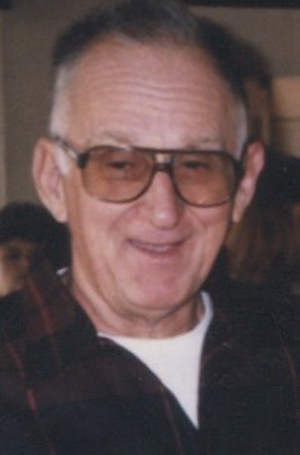 He was born August 20, 1933 and lived in Hillsboro his entire life. He was predeceased three years ago by his wife of 67 years Joyce.  He was also predeceased by his parents, Leo and Ella Bouchard, a son, Jim, and three grandchildren, Daniel, Joclyn, and Angela.

He worked for much of his life at the local grocery stores in Hillsboro and Henniker, including Baldwin’s Market and the Hillsboro IGA.  He was currently employed by Withington Auction Services, helping in the doll auction business and doing building and grounds work.

An athlete in his younger years, he was involved in coaching his son baseball teams and followed the Red Sox very closely. In later years, he took up golf, a decision that brought many hours of aggravation. He loved a good meal, a game of cribbage, and doing jigsaw puzzles. He was a parishioner of St. Mary’s Church in Hillsboro, NH

Bob was a non-smoker, non-drinker and non-traveler. He was perfectly content to bomb around Hillsboro in his old gray truck, giving his efforts to anyone who needed something done. He was generous with his time, maybe a little stingy with his money, kind to everyone, and never expected anything back. Until his last breath he mowed laws, raked leaves, shoveled snow, painted, papered built things, tore things down, washed windows, cut brush, weed whacked and shingled roofs. He will be missed.

He is survived by the and beneficiaries of his lifetime of giving,  his sons and their wives, Bill and Tish Bouchard of Syracuse, NY, and Rick and Helen Bouchard of Hopkinton, NH,  six grandchildren and five great-grandchildren.

Due to Covid restrictions, we will have a Celebration of Life this Summer. Thanks to all of you who kept an eye on him.

Donations may be made in his name to the Hillsboro Rescue Squad, PO Box 350, Hillsboro, NH 03244.