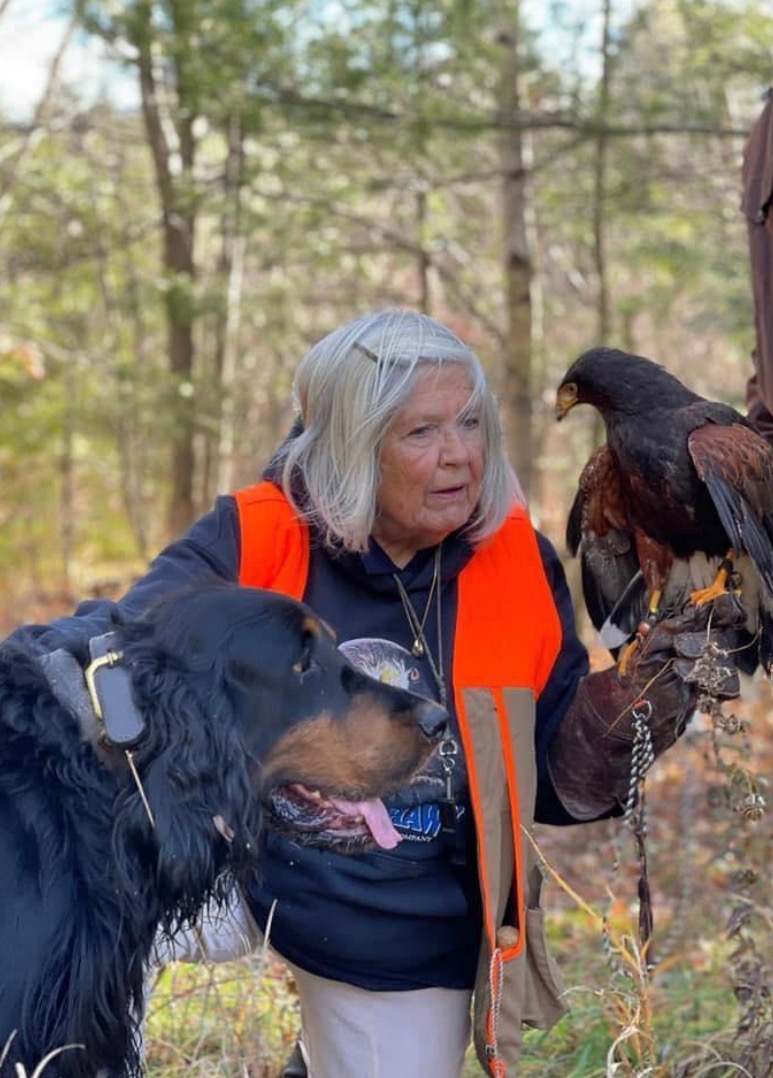 Born Nancy Young in Ottawa, Kansas on March 12, 1947, she was the second child of Frank M. Young and Margret Young (nee. Gault).  At the age of 8, she moved with her parents and brother to North Charleston, South Carolina.  However, she returned every summer to Kansas to spend time on her maternal grandparents farm where they raised a herd of Shetland ponies for the enjoyment of their grandchildren.  It was in this environment that Nancy developed her lifelong love of working with animals.

As a teenager, she developed her skills to becoming an accomplished horse trainer, riding instructor, and championship show jumper. She attended one year of college at Winthrop located in Rockville, SC. At the age of 17 she met Jim Cowan III, a cadet at The Citadel, The Military College of South Carolina. They were married July 27,1968, beneath arched swords at the Citadel Chapel.

A lifelong lover of animals, Nancy and her husband cared for hawks and racoons. While Jim was stationed at the Naval Air Station in Pensacola, FL, the young couple befriended renowned zoologist Patrick Quinn and volunteered at the zoo he ran in Pensacola.  Nancy, while pregnant with her first child, helped to care for monkeys, lions, and elephants. While Jim served a split tour in Vietnam, Nancy traveled with their baby daughter to Okinawa to live with her husband.  There they kept a pet mongoose.

When her husband left the military in 1971, Mrs. Cowan and her family moved to Willington, CT., where they lived from 1973 to 1978, maintaining a connection with animals through introductions, first in volunteering as a handler and then actively participating as a racer in sled dog racing community.  In 1978 the family moved to Londonderry, New Hampshire.  Taking advantage of the snowy winters, she raised and trained a full sled dog team.  Racing competitively on weekends in the late fall and winter Nancy developed friendships with legends in the community, in the persons of Richard “Dick” Moulburg, Doctor Roland “Doc” Lombard, Eva “Short” Seeley and world-renowned sled-maker Ed Moody.

Through her participation and associations in sled dog racing Nancy established herself as an author, regularly contributing to Team and Trail the primary publication of the sled dog community.  Through chance and fate, she became the curator of a number of documents and artifacts from the polar expeditions led by Admiral Richard E. Byrd.   In her retirement from racing and continued research, she wrote her breakout article on the Chinook Dog for Yankee Magazine.  This led to her eventually spear heading the historical recognition of Wonalancet Kennels as the staging area for many of America’s Antarctic exploration of the 20th century as well as adoption of the Chinook dog as New Hampshire’s state dog in 2009.  In turn this led to articles in Dog World, Dog Fancy, Popular Dogs, Downeast, and many more articles for Yankee magazine.  Her research filled five self-published books on the history of sled dogging and its connection to polar exploration.  Her book On By was carried through an Iditarod race and presented to the mayor of Nome.

In the late 1980s, she actively supported her husband Jim’s desire to return to falconry.  With her husband, through direct work with NH fish and game officials and lobbying of state legislators, she and Jim were able to complete a multi-year odyssey to bring the traditional art and practice of training and flying birds of prey to New Hampshire. The ancient art was legalized in New Hampshire in 1988; 28 years before falconry was inscribed on the United Nations Educational Scientific and Cultural Organization (UNESCO)’s Representative List of Intangible Cultural Heritage of Humanity in 2016.

Always fascinated with her husband’s hawks, Mrs. Cowan became a falconer herself, eventually achieving the level of Master Falconer.  She and her husband were instrumental in bringing and educating much of the state in the sport of falconry through many volunteer appearances at NH fish and game events, individual community events, as well as appearances on both NH public Television and WMUR news magazine programs.

In 1994, with a growing number of hawks and falcons, the Cowans moved to a 1789 home on a 28-acre farm in Deering, NH.  In 2001, at the request of a federal wildlife biologist who had rescued an injured peregrine falcon, Mrs. Cowan became a licensed wildlife rehabilitator specializing in birds of prey. She worked with and released a variety of sick and injured raptors and was frequently consulted by other wildlife rehabilitators and by New Hampshire Audubon when birds needing help were rescued.

Through her introduction to providing private programs at the Timberdoodle Club, owned and operated by Randy Martin, she was inspired to establish a falconry school of her own.  The New Hampshire School of Falconry, the only school of its kind in the state and one of only a handful on the eastern seaboard, was established in 2005 and located at her home in Deering.  At the school she provided lessons, walks and hunts for a wide range of students which included schools, Girl Scout Troops, international rock stars, and major CEOs.  Nancy’s school shot to international acclaim when one of the raptors in the couple’s care, a Lanner falcon, named Banner, made international headlines in 2014 when she became the first hawk in history to undergo successful laser cataract surgery.

Throughout, she continued to give frequent talks and demonstrations of falconry at schools, museums, nature centers and festivals throughout the northeast. Her work was featured on New Hampshire Chronicle, in a promo for the Netflix series “The Society”, film work for National Geographic and the Discovery Channel.  She was also written about in numerous regional and national publications.  Amongst her prouder accomplishments was being a longtime instructor for “Becoming an Outdoors Woman.”

Her introduction to Sy Montgomery, one of her first students at the School of Falconry, led to her inclusion in Ms. Montgomery’s 2019 book Birdology.  The friendship between Sy and Nancy led directly to Sy inspiring Nancy to write her own memoir of 30 years among birds of prey, Peregrine Spring, which was published by Lyons Press in 2016. The book became a New York Times National Bestseller and was honored by a Best Books of 2016 award by the New England Outdoor Writers Association.  She was at work on a sequel when she died.

Additionally, Nancy held numerous other interests and hobbies as well as serving for 15 years as the Town Clerk and Tax Collector for the Town of Deering, NH.  Not to be lost in her tremendous work was that she was a devoted wife of 54 years.  Loving mother of two children whose own lives were enriched in school activities, extra-curricular sports and outside classes by her boundless energy and support.  She was a doting grandmother of two who never ceased to lavish love and affection.  Though out her life from any community, Nancy was generous of her time and patience volunteering donating and sharing her knowledge and enthusiasm of her interests with anyone who asked or was in need.

Arrangements are being handled by Holt-Woodbury Funeral Home in Hillsborough. A Celebration of Life will be held in the Spring at a date and place to be announced by the family.

In lieu of flowers please send donations to the Nursing Staff of 5 South in care of the Concord Hospital.