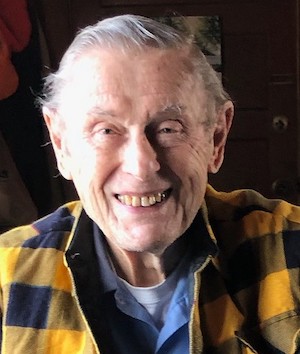 Rudolph was born in Germany and came to the US at the age of 15. Soon after, he enlisted in the army and fought in WWII. He was captured in the Battle of the Bulge near the end of the war.

Rudolph lived most of his life in Medford, MA.  He built a summer home in Deering, NH in 1956, where he and his family spent weekends and summer vacations. After his wife passed in 2014, he moved to Deering permanently.

Rudolph worked at Draper Labs in Cambridge, MA as a machinist in component development.

In his retirement he loved helping his sons in building projects. He also enjoyed working on clocks, painting and keeping his property well maintained.

He survived his wife of 66 years, Sophia Standke (Miskevitch), who passed away 2014. He has two sons, Rudi K. Standke of Plaistow, NH and Eric R. Standke of Deering, NH.

There will be services at East Deering Cemetery in late April/May for family and friends.