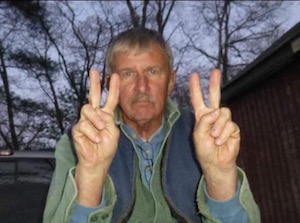 George was born in Newburyport, MA on July 26, 1951.  He was one of the 12 children of the late Charles A. and Patricia (Little) Pollard, and a graduate of Newburyport High School, Class of 1969.

Raised in Newbury and Newburyport, MA, George later moved to Salisbury, MA, where he raised his own family.  He most recently resided in Hillsborough, NH, but had also briefly resided in Texas and Colorado.

George was a longtime construction worker, both as an independent contractor and also for the Town of Newbury, serving for a period of time as the Superintendent of the Highway Dept.  In recent years, he took pride in the relationships he fostered with Amish communities of northern New York, and he bought and sold farm equipment with the Amish as a hobby.

George will be most remembered by all those who loved him for his sense of humor and his generosity.  If you were in need, George would be there for you at a moment’s notice; if it was for help with a car or home repair or advice with a life problem, George would drop everything to help.

Memorial services will be held in the Spring 2021 at Oak Hill Cemetery in Newburyport, Massachusetts.

Memorial donations may be made to the American Heart Association, 7272 Greenville Ave, Dallas, TX 75231 or at www.heart.org