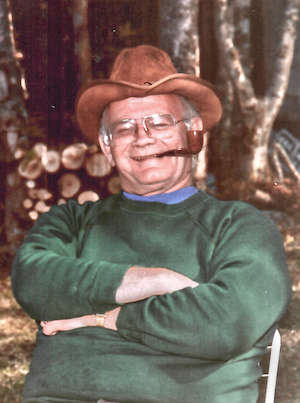 HOPKINTON, NH:  Arlan Stanton MacKnight left this world August 5, 2022, to be reunited with his wife, Mary Lou.  Mac's life began December 6, 1932, in Orange, Massachusetts, born to Evangeline Coolidge MacKnight and Ralph MacKnight.  He was the youngest of five children. Upon graduation from Orange High School, Mac joined the army and served in the Korean War. When he returned from Korea, he earned a degree in accounting from Bentley College.

On February 12, 1955, he married Mary Lou Cooke and a family soon followed. He became a bank examiner and worked in Boston. In 1960, the family moved to Hopkinton, NH for a job with the State of New Hampshire's Banking Department.

During that time, the “Bridge Group” was formed. They played together for 55 + years, enjoying laughter, casseroles, and Pizza Super Bowl parties.

Mac rose to the position of Deputy Bank Commissioner and retired after serving the citizens of NH for 21 years. In retirement, Mary Lou and Mac enjoyed traveling the world and spending summers in Nova Scotia. They had many years celebrating life and making wonderful memories with family and friends.

Mac was predeceased by his parents, his brothers, Harding, Sheldon, and Clinton and his sister, Elaine.  He is survived by daughters, Lynn (Mark) of Colbert, WA, Donna (Peter) of Gloucester, MA, and son, Scott (Sandra) of Leominster, MA.  Mac’s eight grandchildren and twelve great-grandchildren all have special memories of Grampa/Papa Mac.  He will be greatly missed by all who knew him.

Services will be held in the First Congregational Church, 1548 Hopkinton Rd at 2 pm, August 27th, followed by a Celebration of Life at 3:30 at Beech Hill Farm and Ice Cream, 107 Beech Hill Rd, Hopkinton, NH.

In lieu of flowers, donations may be made in Mac's name to Hopkinton Food Pantry, Slusser Center, 44 Houston Dr, Contoocook, NH 03229.