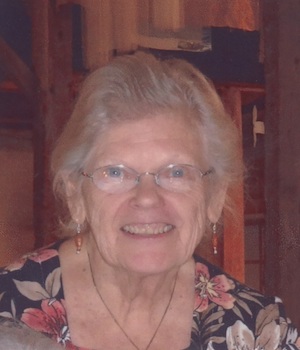 HENNIKER, NH:  Liga Lauris, of Henniker, NH died peacefully Wednesday, April 15, 2020 at her home with her loving husband and family at her side.

She was born on June 10, 1936 in Jelgava, Latvia to Zanis and Lucija Feldmanis.

During WWII, she and her family were forced to leave Latvia because of a hostile Russian occupation. At the end of the war, the family was interned in a displaced persons camp and were able to immigrate to Ferndale, California in the United States. Job opportunities and permanently established refugee friendships enabled the family to relocate to Boston, Massachusetts. After graduating from High School, Liga attended Boston University and graduated with a BA Degree.

In 1954, she met her future husband Dzintars Lauris who joined the US Air Force in 1959. On September 9, 1961 they were married in Warner, NH. They have a daughter, Astra, and a son, Eriks. After their military retirement in 1979 the family settled in Henniker, NH, where Liga pursued a career in microbiology as a Lab Technician in Laconia and Concord, NH until her retirement in 2010.

She is survived by her husband, Dzintars Lauris, and her daughter, Astra and her husband William, her son, Eriks Lauris and his wife Tamara, and her grandson, Zanis James Lauris.

Service will be held at the convenience of the family.

Burial will be in the NH Veterans Cemetery in Boscawen, NH.