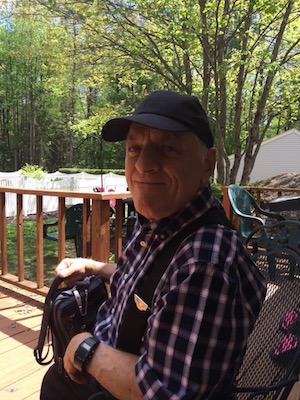 ANTRIM, NH:  Joseph Albert Huot returned home to the Lord on April 22, 2020 after a long courageous battle with heart disease. He was born on June 28,1947 in Manchester, NH where he was raised by his late parents, Joseph and Albertine Huot.

Joseph attended Sacred Heart Catholic School through his adolescence. He enlisted in the Navy in1965. He was later honorably discharged to care for his ailing father.  He worked at Carol Cable in Manchester NH for many years, as well as at Thom McAn Shoe as a shoemaker. At one time he was employed by Vince McMahon for the WWE to set up local wrestling events.

Joseph was a member of the Knights of Columbus. He was proudly sober for over 25 years and an active member of Alcoholics Anonymous. He was a sponsor and inspiration to many. He cared for his mother and father throughout his young adult life. He married his first wife, Maxine, and helped raise their nephew, John Malonas.  Joseph also cared for Maxine with her family's help until she passed away from complications of diabetes.

Joseph married his second wife, Kathleen, and became a wonderful father figure to her children. Their only child together, Angel Huot, passed before birth.  Joseph relocated to Keene NH in his later years, and retired in 2003 to become a full time grandpa, helping raise his four granddaughters, Angelina, Autumn, Addyson and Aubrey .He was lovingly cared for by his daughter Siobhan and her family in Hancock NH for many years. He was a doting grandpa who beamed with pride over his grandchildren. They were the loves of his life. He enjoyed spending every chance he would with them and spoiling them with his love.

He exceeded all odds when he was diagnosed with end stage heart failure in 2012 and given only months to live. He was considered a miracle by doctors when not only did he survive, but he thrived. Joseph used his time wisely and lived life to the fullest. His battle with heart disease was not for the faint of heart. He had the courage of a brave warrior. The most selfless act of love was giving his family the gift of time and love. As it has been said, God gives his toughest battles to his strongest soldiers.

Joseph attended the Monadnock Adult Care Center in Jaffrey, NH for many years. He had a reputation there as a card shark who loved to play poker with the guys. He always brought his smile, positive attitude, and wise guy sense of humor. He was kind hearted and always thoughtful. He loved to bring gifts to share at the holidays.

He always looked on the bright side of everything and could light up a room. He looked forward to his rides on the bus with his driver George and always had good music for their rides.

Joseph attended the Antrim Baptist Church in Antrim NH and was a faithful servant of God. He had many passions and hobbies. Joseph loved listening to music and collecting it. He played cards, bingo, and he was a passionate fan of WWE wrestling. He loved trips to Walmart, the ocean, telling his stories, and being anywhere with his family. He enjoyed his weekly adventures with his friend Ben, going out for ice cream or shopping. Joseph was notorious for coming home with bags of candy for his grandchildren. Joseph was a loyal, devoted, and a loving husband, father, grandfather, son, brother, uncle and friend.

Joseph was the beloved husband of the late Maxine Huot (Malonas) of Manchester, NH and brother to the late Charles Huot of Manchester, NH. Joseph leaves behind his sister, Lucille Sanchez of Concord, NH his second wife, Kathleen Simarano of Keene, NH and their children: Siobhan Simarano and her daughters, Angelina, Autumn, Addyson, and Aubrey of Hancock NH, Jessica Simarano-Bruno and her wife, Laura, and their daughters, Lillian, Josephine, Margaret, and Eliza of Keene, NH, Jason Simarano of Hollywood, CA, his nephew, Jay Sanchez and his family of Manchester, NH, his nieces, Lisa Bunker and Tina Sanchez of White Settlement, TX and their families, as well as many other family and friends. Joseph will be dearly missed by everyone. May his life, legacy, and memory live on in all the lives he has touched with his kindness and smiles to others.

A special thank you to his beloved volunteer, Ben and his wife Adelle Gagnon of Greenfield, NH, Monadnock Adult Care Center, Catholic Medical Center, New England Heart Institute, Home Healthcare, and Hospice Dr. Serena Shamody for her years of dedication, Dr. Olga Voroshilova and her amazing nurse Julia, and all the doctors, nurses, and assistants for their compassion.

A graveside ceremony will be held on September 27,2020 at 1 pm at the Butler Cemetery in Deering NH.

A celebration of life will follow at the Hillsborough, NH VFW located at 538 W Main Street.  The Holt-Woodbury Funeral Home & Cremation Service is assisting the family.

In lieu of flowers, cards of condolence can be sent to Joseph’s family: Siobhan Simarano PO Box 4070 Concord, NH 03301.