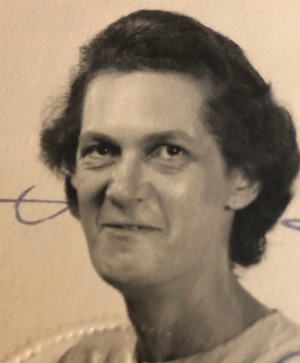 Mary was born on October 29, 1927 in Manchester, England to Peter and Frances Crook.

Mary moved to the United States following World War II. Mary was a hardworking and independent woman who was determined to provide for her children. In order to provide best future for her family, she moved them from Elizabeth, NJ to Hillsborough, NH in 1974 where she coached cheerleading for the high school and worked for Frameworks. In her retirement she worked in the rectory at Saint Mary’s Church in Hillsborough, NH. Mary moved to Concord, NH in the late 2000s to allow her to continue her independence despite using a wheelchair.

Mary was an active participant in her grandchildren’s lives. Mary enjoyed gardening, crocheting, sewing, baking and spending time with her cat, Calico.