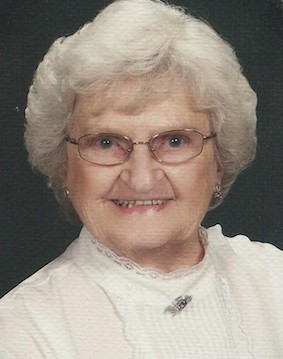 She was born to Earl and Vanessa (Hicks) Beard on July 8, 1923.  Jean was the sister of Waldo and Francis Beard, both of Hillsboro.  After graduating High School, she attended Margaret Pillsbury Nursing School in Concord, NH where her grandfather, Joseph Hicks was track supervisor for the Boston & Maine Railroad Company.  With the exception of a nursing rotation at Belleview Hospital in N.Y. City, she lived her entire life in Hillsboro. Upon receiving her RN certification, she returned to Hillsboro and married James C. Kimball, also a lifelong resident of Hillsboro wo served in the Pacific as a Chief Electrician’s Mate during WWII.  She was the mother of two sons, James M. and David and a daughter Nancy.

Her nursing career included private duty nursing, Hawthorne College and GTE Sylvania where she worked for many years.

Jean was an avid quilter and won several ribbons at local fairs. She will be remembered as a mother, grandmother and great-grandmother who loved her family more than any earthly treasures. She loved nature and all its creatures and was blessed all her life by God and Jesus, who gave her strength and courage through the worst of times.

According to her wishes, there will be a graveside service in the Spring.