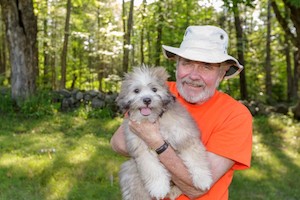 Born in Boston, Massachusetts, he was the son of the late Thomas F. Leary, Jr. and Amelia (Yaras) Leary.

In his youth, he lived in Charlestown, MA, went to Sacred Heart School and Bentley College. After marrying Patricia in 1965, he moved to Lynn, MA, where they had five children. He moved his family to Bethlehem, NH in 1974 and then finally settled in Warner, NH in 1977 where he lived and worked as an accountant and book keeper. He was a very active parishioner of Saint Theresa’s parish of Henniker. A devote Catholic and a faithful follower of Jesus Christ. Paul was a lover of all creatures big and small, particularly dogs and cats.

He leaves his children: Pauline J. Leary-Opala and her husband Bob, of Haverhill, MA; Christopher P. Leary and his wife Donna Filippone of New York, NY; Thomas J. Leary and daughter-in-law Mara Leary both of Henderson, NV; Joel R. Leary and wife Daphne of Manhassett Hills, NY; and Jennifer A. Leary and her Phil of Wilmot, NH; his grandchildren: Natasha Constant and her husband Nick, Hayden Leary, Layne Leary, Gage Leary, Rafael Leary, Gareth Leary, and Logan Leary; a great granddaughter Piper;  three dear sisters-in-law: Joan Belcastro, Ida Thornton, and Cecile Rooney; along with many nieces and nephews. He was loved by many.

Calling hours will be February 27th from 5 to 7 pm at the Holt-Woodbury Funeral Home in Henniker.

A funeral Mass will be held Thursday, February 28th at 11 am, at St. Theresa’s church in Henniker, with a burial late Spring of 2019.

In lieu of flowers, memorial gifts may be made to: Catholic Relief Services or The NH Food Bank.