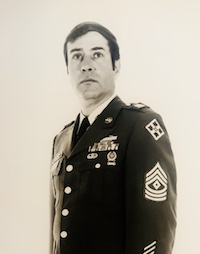 HILLSBORO, NH:  Peter F. McCosker II, 75, resident of Hillsboro, NH died in his home after a period of declining health, in the morning of March 11, 2018.

He was born in New Haven, CT, on January 15, 1943, a son of the late Peter F. and Frances (Millan) McCosker. Peter was a true American hero, a loving father and husband. He served our country for over 20 years in the U.S. Army, taking on various roles and responsibilities.

Peter was an Airborne Ranger who served in many varying Infantry and Armor Divisions and trained many soldiers as a Drill Sergeant. His military career began on January 17, 1961 and he was stationed in many places, New York, Virginia, Georgia, Kentucky, Colorado, Germany, Korea and Vietnam. Peter served two tours in the Vietnam War.

On October 31, 1981 Peter retired from the U.S. Army as a 1st Sergeant. He then went on to work as a civil servant for the Department of the Army for 21 years. Peter was also a 32nd degree Freemason. Peter loved his Lord and Savior Jesus Christ, and took great enjoyment speaking the word of the Lord to anyone. Peter enjoyed going out to eat, fishing barbeques, and going boating with his family. He also took great pride in his coin and stamp collections. He was a loving father and husband who would do anything for his family.

Toward the end of his life, the U.S. Army informed Peter that he had achieved the highest enlisted rank of Master Sergeant.

A graveside service with Full Military Honors will be held in the Spring at the Mount Calvary Cemetery, Marlborough, NH at a date and time to be announced.