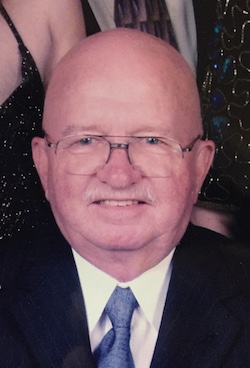 BRADFORD, NH:  Thomas Arthur Pehrson, 78, of Bradford, NH died February 16, 2018 at his home. Thomas entered Heaven and into the arms of his deceased son Thomas Chester Pehrson (1969-1989) and standing by his side was his loyal English Mastiff, Maulie.

Thomas attended Arlington High School and Northeastern University.  He served in the U.S. Navy on the DD709 Hugh Purvis.  He held Master Electrician licenses in both NH and MA. He was Vice President of Operations for Videography and was a pioneer of video tape for the Patriots, Red Sox, MA State Police and many schools in the area.  He worked for Polaroid Corp and Village Electric, along with having his own company, Tom Pehrson Electric.

Tom loved his sports and sports teams.  He was a member of the DD “Romeos” who met every day for coffee in Bradford.  He was also a member of the American Legion, and the Hugh Purvis’ Ships Reunion Committee.  Every year for 17 years he attended his ship’s reunion with many of his fellow shipmates. He was a member of the Westford Fire Department in Westford, MA and a certified EMT for 27 years.  He also participated in the Thomas C. Memorial Golf Tournament for the last 29 years and was proud of all the men who played every year.  He loved them.

Over the years, Tom and his wife Jackye took in 52 teenagers who needed help, love and guidance, but only 6 were foster children.  We were always grateful for the love and respect we received in return and still are.  Tom is survived by his wife, Jackye, his daughter, Tina and son-in-law Andrew Levell of Hillsboro, and his brother and sister-in law, Rick and Susan Pehrson of Bradford.  The Patriquins, Rochons , Browns and  Morales/Martins were loved by him and  cherished as family members. He and his BFF, Ted MacLeod, were friends for over 45 years. Tom had several” grandchildren”, Erica, Tim, Kayla, Maria, JJ, Daryl, Mandy, Miguel, Amy, Nick, Tiffany, Phillip, Sarah, Rachael, Kayla, Laura, Tristan, Nina and Brian and “great-grandchildren”, Connor, Jackson, Adelyn, Riley, McKensie, Gabby and Gaven.  His nephew and nieces, Kyle, Marancy and Melaney were also very close along with the Weast and Larose families.

Calling hours will be held Friday, February 23, 2018 from 2 to 6 pm in the Holt-Woodbury Funeral Home & Cremation Service Henniker, NH.

Donations may be made in his name to the Bradford Fire & Rescue Squad, 97 W. Main St, Bradford, NH 03221 or the Henniker Rescue Squad, P. O. Box 216, Maple St., Henniker, NH
Express Your Condolences