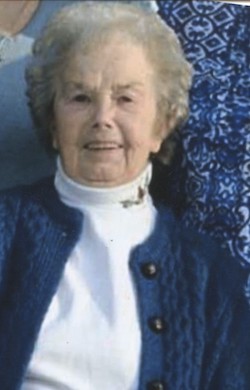 HILLSBORO, NH:  Virginia R. Wing, 88, lifelong resident of Hillsboro, NH died at her home surrounded by her loving family, after a period of declining health on December 24, 2018.

She was born on September 9, 1930 in Hillsboro Center, a daughter of the late George and Florence (Murdough) Edwards.  Virginia was married to the late Earl Wing and she is survived by her two daughters Robin Card and her husband Bryan (Ace) Card of Deering, NH and Cheryl Whitney and her husband Thomas Whitney of Hillsboro, NH.  She is also survived by seven grandchildren, Ginger Card, James Card, Richard Card, Russell Card, Traci Blain, Thomas Whitney, Jr., and Lisa Whitney.  Virginia also had 14 great-grandchildren who loved to call her Grammy Cookie.  She was also survived by her caregiver and longtime friend, Brenda Meattey.

Virginia came from a family of ten and there are three surviving siblings. Orville Edwards, of Contoocook, NH, Eugene Edwards of Hillsboro, NH and Allen Edwards of Deering, NH.  She was an active member of the Deborah Society with the Hillsboro Smith Memorial Congregational Church, and served as the Lunch Lady with Hillsboro Deering School District for 31 years.  Baking for her family, friends, and community was a lifelong passion.

Graveside services for Virginia R Wing who died December 24, 2018 will be held Saturday June 8, 2019 at 11 am in Butler Cemetery in Deering, NH.

The Holt-Woodbury Funeral Home & Cremation Service is assisting the family