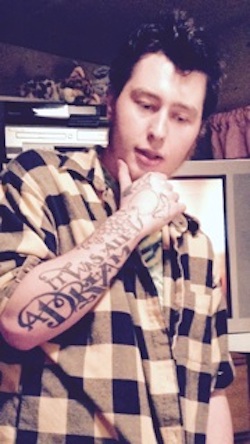 DEERING, NH:  Ryan Christian John Talbott, 25, from Deering, NH Left us until we meet again on August 9, 2018 at Concord Hospital from complications related to asthma.

Ryan was born on February 3, 1993 in Concord, NH to his parents, Christine Talbott and John Talbott.

He tragically leaves behind his two sisters, Ashley Talbott and Cassondra Talbott, both of Deering, NH, and his friends, Brian Lavoie and Daniel Williams. Ryan also leaves behind his three baby-boy cats, Simon 3, Leo 3 and Calvin 3 who he saved from certain demise. Ryan had a few good friends that he loved like brothers, Mike, Anthony and Bret and he was predeceased by his best friend, Kevin, who he is with again.

He went to Hillsboro Deering School and was the first, and so far, the only one in his family to get his GED.

Ryan was extremely smart and talented and could fix anything. Ryan was the vape doctor at Smoker’s Choice in Concord. Ryan was an artist and music was his life. He was a talented left handed tattooist. His sisters as well as many of his friends have been his canvas. He was an avid believer in the healing properties of medicinal marijuana and he believed it was going to save this world. He was a believer in living naturally and wanted to be off the grid. Ryan was a caring compassionate man who put his own life on hold to take care of his family. Ryan was truly a beautiful soul and will always be missed, until we meet again we’ll all float on.

Ryan family is holding a candlelight vigil and celebration of life at a later date to be announced.