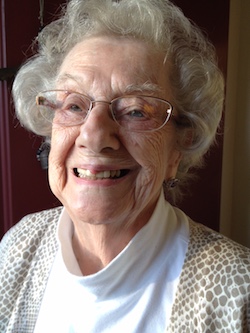 HILLSBORO, NH:  Janice May (Congdon) Walsh 102, of Hillsboro, NH died In the early evening on August 2, 2018 and went out dancing with her husband of fifty years, James Francis Walsh who had left this earth in 1985 at the age of seventy.

They were joined by her brother-in-law Joe Walsh and his wife Fran, her sister-in-law, Marion whose husband is Artie Lewert. Sinatra no doubt appeared briefly to sing a few beloved tunes. Afterward, the party was joined by her father Leslie Congdon, her mother Mildred Rice Congdon and step-mother Ruth Coburn Congdon. Janice’s sister Marian and brother-in-law Eddie Mrozek were also invited to a late supper. The repast was no doubt heavenly despite the long wait.

Left at home, Janice’s only child James and his wife Mary Walsh are bolstered by the presence of Janice’s grandchildren, James Patrick (married to Allison Carr Walsh), and Brendan Daniel Walsh. Great-grandchildren Shayla and Liam will miss Great Gram.

Janice was born in Ithaca, New York on Valentine’s Day 1916. One of her first memories was marching in a women’s suffrage parade with her mother and grandmother. Her family moved to Dunmore, Pennsylvania where she lived through the Great Depression. In 1934 she met the love of her life at a circus and the next year she converted to the Democrat party and the Catholic Church to marry him in 1935. Then the War came and he served abroad while Janice rationed and worked on the Home Front to defeat the enemies of freedom and toleration.

After the War, Janice found work as the secretary to the Scranton-Wilkes-Barre Triple A Red Sox affiliate. In 1954, She and her husband Jim began their family by choosing to adopt a baby. They provided him with the best possible life of loving support and encouragement any child could dream of and will continue to guide him as long as he lives.

Janice and Jim took their family to Florida where they prospered in the way suburban families did, working and living simply, long before the tourist explosion of the late sixties. Janice brought glowing recommendations from her employers in Scranton and was soon working as an accountant. She managed to work full time until retirement while being an amazing mother and wife. As a widow, Janice travelled the world with her church group and with the AARP chapter in Orlando. She was president of the local chapter and then a regional officer as well.

In 2001 Janice began her last big adventure, she moved to New Hampshire to be with her son and his family. She was ravaged by chronic bronchitis but the clean air and loving care of Dr. Teri Brehio revived her and she thrived here in the Tooky Valley. She was independent for the best part of seventeen years and recently became a proud holder of the Boston Post Cane for Henniker. Ill-health led her last October to the comfortable safety and loving staff of Hillsborough House.

A memorial mass will be held at St. Theresa’s Church in Henniker on Friday, August 10 at 4 pm. Janice’s family will be present the hour before and a short refreshment will follow the service.

The Holt-Woodbury Funeral Home & Cremation Service Is assisting the family.

In lieu of flowers (which she loved but claimed made her eyes and nose run), donations to the Henniker Food Pantry would be welcome.