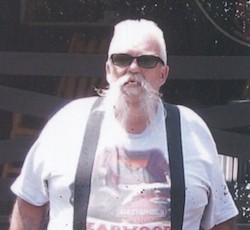 He was born on March 18, 1962 to the late Frederick F.  and Jeanette Constance (Guimond) Colucci.

Frederick was known to many by many names; Fred, Freddie, Barry, Rat and Fat Rat.  He lived a full and adventurous life. He loved his friends, his family and his motorcycle. He was an artist, an explorer and an avid taker of “short cuts.”  After retiring from a long and celebrated career at Raytheon, Frederick took up many hobbies, from welded lawn sculpture to converting an ambulance into a camper for traveling the country to escape New Hampshire winters.

His larger than life personality allowed him to touch the lives of many people, always bringing joy and laughter. He will be deeply missed by the people who knew him, because those people who did loved him.

Calling hours will be held Thursday, August 30, 2018 from 10 am to 11 am in the Holt-Woodbury Funeral Home & Cremation Service, 32 School St, Hillsboro, NH, followed by a funeral procession to Wilkins Cemetery in Deering, NH.