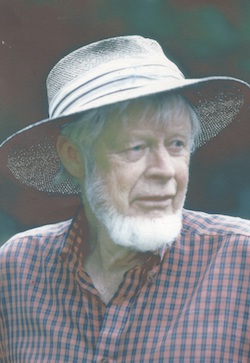 WASHINGTON, NH: Marvin Jager, 89, of Washington, NH, died at Dartmouth-Hitchcock Hospital on September 27, 2017.  He was born May 12, 1928 and raised on a family farm in McBain, MI.  He served in the US Army during the Korean War, graduated from Calvin College in Grand Rapids, MI, and served the US Government for NATO in France in the early 1960s, spending the rest of his government career in the DC area, primarily as a civilian for the Air Force in the Office of the Pentagon.

After his retirement in 1987, Marvin and wife, Nancy, moved from Silver Spring, MD to the Town of Washington, NH, where Marvin designed and built their house and gardens on Half Moon Pond Road, and where they have lived for the past 30 years.

Marvin was predeceased by his parents, Jess and Kate Jager and by his first wife, Marilyn. He is survived by wife, Nancy, son and daughter-in-law, Eric and Peg Eby-Jager, of Los Angeles, CA, daughter and son-in-law, Sonja and David Gredanus of Baltimore, MD, grandson, Jacob Gredanus of Boulder, CO, sister, Gladys Uitvlugt of Mc Bain, MI, brothers and sisters-in-laws, Ron and Grace Jager of Washington, NH, Nelvin & Lucille Jager of Grand Rapids, MI, and Carl and Dianne Jager, of Tucson, AZ.

A Memorial Service and Reception will be held in the Washington Congregational Church on Tuesday, October 3rd at 11 am, followed by a graveside committal at the Center Cemetery.

In lieu of flowers, gifts in Marvin’s memory may be made to the Washington Congregational Church Memorial Fund, 1 Half Moon Pond Rd., Washington, NH 03280.