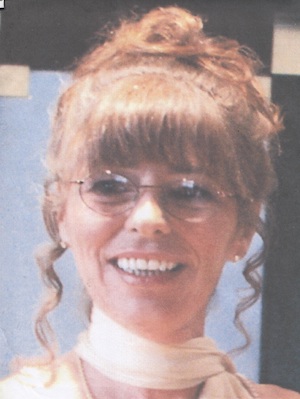 She was born April 8, 1958 in Melrose, Massachusetts, to Rosario Robert and Patricia Giglio.

Karen was a long time resident of Hillsboro. She graduated from Hillsboro-Deering High School in 1976 and was employed for many years as a Quality Inspector by New Hampshire Ball Bearing; she also worked as a production manager for alocal specialty newspaper, Paintball News, and was her second husband’s partner in several business ventures including the online magazine Amazing Stories.

Services will be held at graveside in Maple Ave Cemetery in Hillsboro, NH at 10 am on Saturday June 3, 2017 followed by a celebration of Karen’s life.

Memorial contributions may be made in Karen’s name to the Dana-Farber Cancer Institute, NHOH, 40 Buttrick Rd, Suite B, Londonderry, NH 03053 or to the Patron account for the Karen Lynn Davidson Memorial Award.