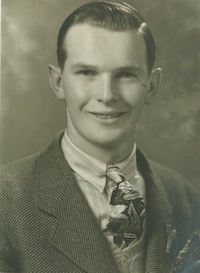 HILLSBORO, NH:  Charles H. Murdough 94, of Hillsboro passed away peacefully on Thursday March 2, 2017 at Hillsboro House after a lengthy illness.

Charlie was a lifelong resident of Hillsboro, born on May 29, 1922, one of ten children of the late Clifford and Stella (Russell) Murdough, Sr.  He was predeceased by his wife of 58 years, Bernice (Goodwin) Murdough and siblings Frances Sweet, Clifford Jr., Everett and Kenneth Murdough.

Charlie attended a one room schoolhouse later graduating from Hillsboro High School. He worked for E.W. Bailey & Co., E.C. & W.L. Hopkins Co., Sylvania Electric Products Inc., Hillsboro Lumber Co. and retired while working for Richard W. Withington, Inc.  He was a member of the Hillsboro Methodist Church and worked as their sexton for many years. He was a soft-spoken, devoted husband and outdoors man who enjoyed gardening, woodworking and helping his family.  Charlie and all of the Murdough family had fond and dear memories of the many visits and gatherings at the Murdough farm on Center Road.

Charlie is survived by his sisters, Marion and her husband Edwin Cilley of Hampden, MA., Ruth Gerini and Edith Murdough of Hillsboro, Evelyn Young of Concord and Alice and her husband David Dole of Portland, CT; his children, Donald and his wife Emy Murdough of Hillsboro, Ellen and her husband Richard Comeau of Rumney, David and his wife Debby Murdough of Oakridge, Oregon, and Cathy and husband Steve Briggs of Cumberland, Maine; his grandchildren Jamie, Jacob, Benjamin, Kimberly, Jeremy and Joshua and several great grandchildren, many nephews, nieces and numerous cousins.

A graveside service will be held at 11:00 am, May 20th at Harvey Memorial Cemetery, Shedd Road, Hillsboro followed by a Celebration of Life at the Hillsboro Center Clubhouse for family and friends.

The family would like to thank Hillsboro House and staff for his great care of the past ten years.

Holt-Woodbury Funeral Homes of Hillsboro is assisting the family with arrangements.

In lieu of flowers, the family requests donations to be made in memory of Charlie to the Hillsboro House Activity Fund, PO Box 400, Hillsboro, NH  03244.