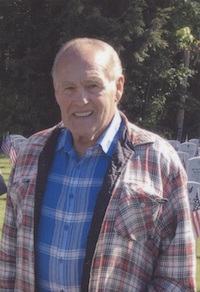 MANCHESTER, NH:  Richard Armand Jalbert, Sr. of Manchester NH passed away on Monday, December 18, 2017 at the Villa Crest Nursing Home in Manchester NH, with his family by his bedside.

Richard joined the Marines in 1952 for two years then served in the reserves. After serving his country, he got married to Joan, worked on an apple orchard, at Nashua Wood Products in Merrimack for many years, and then atTriangle Pacific until he retired.

Richard enjoyed fishing, driving to Connecticut with his wife to gamble, taking rides to visit the kids on the weekend, and taking care of and walking his dog, P-Nut.

Graveside service will be held in spring at the NH Veterans Cemetery in Boscawen, NH, where he will be buried beside his wife.