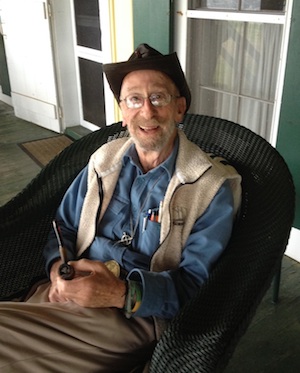 Born in New Bedford, MA on June 21, 1937 to Nancy (Read) Sherman and Gordon R. Sherman, he spent his teenage years in Manhasset, LI.  He met his spouse Cynthia “Cy” (Scudder) Sherman at the high school there.

He worked as V.P. of the Hempstead Bank in Manhasset as well as a Real Estate Broker.  He and Cy were active in the Congregational Church of Manhasset, where they were co-Presidents of its Couples Club. Gordon also directed the 7th and 8th grade Sunday School program for two years.  He is a 50+ year Mason and was Master of the Paumanok Lodge in 1969 in Port Washington, LI.  Also keeping him busy at different times was being President of Manhasset Kiwanis and Manhasset Chamber of Commerce.

A favorite place to vacation was at Scudder Cottages on Shelter Island, LI where he undertook several large building projects.  The most challenging one was renovating almost singlehandedly a kitchen in one of the cottages.  Vacations there included sailing, playing tennis, kite flying and watching magnificent sunsets.

For seven summers he and Cy and their three children (Terry, Read and Claudia) spent a week’s vacation with other church families at the Deering Conference Center in Deering, NH.  Loving it, they were thrilled when the chance came up to become its Co-Directors in 1973.  The Shermans moved to Peterborough, NH from Manhasset in 1974 and ran the Center for 15 years, eventually moving to the Center year round.  During his years in that community he was active in the Deering Fire Department and became certified as an EMT.

Gordon had a big heart and wanted to make a difference.  He found ways to reach out to others, helping to start NH PFLAG (Parents, Families and Friends of Lesbians and Gays) in 1986 and volunteering with the homeless community through the Concord Homeless Resource Center for five years.  The Shermans received the Home Instead Salute to NH Senior Volunteers in 2013 donating the prize money to the Resource Center.

He was a part of NH Tres Dias which met for several years at the Deering Conference Center.  Also he was involved in NH Kairos in the Concord prison.

After retiring from the Deering Conference Center Gordon and Cy moved to Francestown, NH. He became active with the Francestown Improvement and Historical Society and was the            co-chair of its Labor Day Parade for several years.  In 2003 they moved to Havenwood Heritage Heights in Concord.  Gordon was active on campus in Scoops, the ice cream shop, as well as serving on several committees.  Their real joy for eleven years was organizing art displays to beautify the walls of Havenwood’s Main Street.