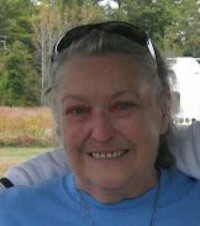 HILLSBORO, NH:  Shirley (Perrier-Lamothe) Hare was brought into this world by her loving parents Veryl and Doris Perrier on December 20, 1935 in Boston, MA.

Shirl the Girl, as she was affectionately known, happily lived life to the fullest as a loving wife, mother and  grandmother, passed graciously on April 19th, 2017.

Shirley was an active and caring member of her community, a career women, who worked for Continental Phone Company, the Hillsboro Selectman and served as the Hillsboro Town Clerk and Tax Collector. She was a former co-owner of Pine Ridge Florist. In her retirement, she enjoyed working at the family flower shop, Rimmon Heights Florist.

Shirley enjoyed her many friends and active involvement in her community. She volunteered for the Hillsboro Fire & Rescue Fireman’s Carnival. She was an Auxiliary Member of the American Legion Post No. 59 in Hillsboro, NH, where she took great pride in serving as Secretary and Treasurer for over 20 years, and as a Past Director of District 5. She was also an Auxiliary member of the VFW Post No. 8268 in Bennington, NH and a former member of the Hillsboro Moose Lodge Chapter No. 1091.

Carrying on her family traditions is her loving husband Douglas Hare, and her devoted children:  George and Judy Lamothe of Thomaston, CT, Patricia ( PJ ) Lamothe and Jean Mclean of Stoddard, NH, James Lamothe and David Dubois of Manchester, NH, Gary Lamothe of Antrim, NH, Connie and Tom McNally of Webster, MA, Christine and Scott Bastek of Thompson, CT, Dean and Michelle Hare of Fort Mill, SC, and her precious 11 grandchildren and 12 great-grandchildren.  She is also survived by her dearest brother, Alan Perrier of Woburn, MA, her wonderful niece, nephew and cousins. Shirley was predeceased by her loving son John Michael Lamothe.

Calling hours will be held Monday April 24, 2017 from 4 to 8 pm in the Holt-Woodbury Funeral Home & Cremation Service Hillsboro, NH.

Burial will be in May at St. Charles Cemetery Hillsboro, NH.